This experiment asks a simple question: what colors are birds attracted to? The birds in this experiment were shown feeders that had different colors (red, orange, blue, green and white).

Of all the feeders, the birds will most prefer eating from the red feeder.

What colors are birds attracted to?

We will never know whether birds see or recognize colors in the same way that humans do. Still, we can make an educated guess. Male birds tend to have beautiful, colorful feathers, making them attractive to female birds. Based on this observation, there is good reason to believe that birds are able to perceive colors.

A bird’s eye makes up almost 15% of its body’s weight. In comparison, the human eye makes up only about 1% of our body’s weight. A bird’s eye has cones. Researchers who have examined these cones assert that there is a diverse range of colored oil droplets and visual pigments in these cones, and that his means that birds have a very highly developed sense of color recognition. Some species, such as the hummingbird, are believed to be able to see  ultraviolet light because the flowers from which they drink the nectar have patterns that are visible only under the ultraviolet light.

To find out what colors birds are attracted to, we can look at the colors of flowers and fruits birds tend to consume. Humming birds, for example, like the color red. Other species such as the oriole like orange; they tend to feed on orange nectar.

Print
Complexity level:
6
Project cost ($):
20
Time required:
It will take 3 days to prepare for this science project, and 5 days to conduct it
Material availability:
Easily found at a pet store
Safety concerns: 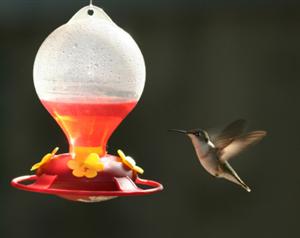