This experiment was conducted to ascertain whether turtles have the ability to recognize colors? Diamondback terrapins were used, and we observed whether these turtles could recognize the color of their feeding trays.

The Diamondback terrapin will be able to recognize colors.

More than 250 species of turtles are known to exist. The largest turtle is the Leatherback turtle: it can grow up to 2.4meters. The smallest turtle is the Bog turtle: it can only grow up to 10  centimeters in length. Turtles move very slowly when they are on shore. They lay eggs in particular locations, and seldom move from these even after their eggs have hatched. Sea borne turtles are fast swimmers. They travel thousands of miles under water just to find a suitable spot at which they can lay eggs.

Turtles are reptiles - that have a hard shells and a soft body. The shell acts as a shield; it protects the turtles from predators. When a turtle senses danger, it withdraws into its shell. Like all reptiles, turtles are cold blooded. They change their body temperature in order to adapt to the environments in which they live.

Turtles live on land and in water. Those that live mainly on land are called tortoises. Terrapins that are found in North America are also called turtles. Terrapins live in seawater, brackish swamps and fresh water. Turtles are also found in deserts, lakes, marshlands, forest, coastal areas and oceans.

Print
Complexity level:
6
Project cost ($):
300
Time required:
It will take 7 days to prepare for this science project, and 3 days observation.
Material availability:
Turtles may be obtained from a local pet store.
Safety concerns: 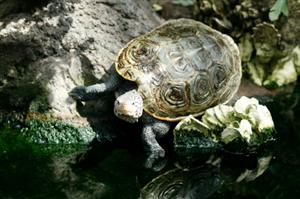