The hypothesis that immersing the steak, chicken breast and salmon in a bowl of Coca Cola would not dissolve the meat has been proven to be true.

Soft drinks like Coca Cola are very popular with consumers of all ages. Phosphoric acid is added to the beverage to give it a tangy taste similar to the flavor normally found in ginger and lemons. Even though the level of acidity is enough to erode tooth enamel or copper coins, its pH is still higher than stomach acid and is hence safe to drink.

The science fair project can also be repeated to test the effects of soft drinks on other calcium-rich materials, by using pieces of chalk instead of teeth.

The experiment may also be modified to test the effects of fruit juice on tooth enamel, by using natural juices like lemon juice, orange juice or pineapple juice.

Is it true that carbonation and acids in soda can dissolve a T-bone steak? - http://www.todaysmodernwoman.com/Non-Alcoholic-Drinks/234090.htm

Is the phosphoric acid in Coca Cola actually dangerous? - http://www.foodaq.com/html/Non-Alcoholic-Drinks/87504.html 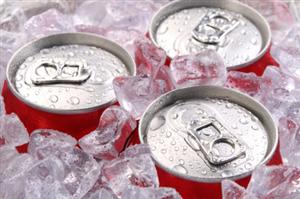