This science fair project was done to find out if hamsters are territorial animals. The tests were done by placing several pairs of hamsters in cages and observing their behavior.

Hamsters placed in the same cage will display antagonism toward each other.

Animals that are territorial will defend the area that contains their nest or den, mating area, food, water and their young. They will normally mark the boundaries of their territories with scents like urine and feces, or rub objects with the part of their body that has a special scent gland. Dogs are known to mark their territory with urine, while cats are more likely to rub their feces against objects to mark their territory. When confronting an intruder, these animals will defend their territory by aggressive visual displays, audible sounds like bird calls and barking, or direct confrontation through fighting.

Hamsters are rodents that are normally used as lab animals, or kept as house pets. These mammals have thick fur and a short tail. Hamsters have poor eyesight but very good senses of smell and hearing which they use to find food and avoid predators. They will normally feed on nuts, berries, fruits, vegetables and sometimes small insects like fruit flies or worms.

Hamsters can live with other hamsters while they are still very young but when they grow older, they must be kept in separate cages because they are very territorial. These rodents originate from the Middle East deserts where resources like food and water are very scarce. They will therefore defend their territory to protect their resources. When two hamsters are caged together, they will normally fight to the death.

Wear gloves when handling the hamsters to avoid getting bitten. 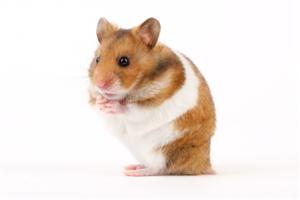