Since the cellphone became commercially available, the number of cellphone users has increased steadily year-on-year. Internationally, there are at present, over 4.3 billion users. The widespread and regular use of cell phones has raised concerns: does cell phone radiation negatively impact the health of users?

Cell phones operate on electromagnetic radiation. Such radiation is within the frequency range of microwave signals. Microwave radiation is known to cause dielectric heating. Human tissue qualifies as a dielectric material. This means that the tissue on our face will experience a slight increase in temperature when we use a cell phone. However, this increase is minimal and can be controlled by the process of blood circulation.

Some of the radio signals that are by cell phones will be absorbed by the skull. However, cell phones typically do not generate more than 4 watts of power. Thus, the power in a cellphone's signal will probably be sufficient to heat up skin and bone tissue slightly, and will probably not cause any permanent damage.

Print
Complexity level:
9
Project cost ($):
10
Time required:
It will take an hour to set up the science project experiment, and an hour to conduct it
Material availability:
The materials required for this science fair project can be purchased at a supermarket. Borrow the cell phones from your friends and family members.
Safety concerns:

Basic safety requirements. Conduct this experiment at your own risk of exposure to cellphone radiation. 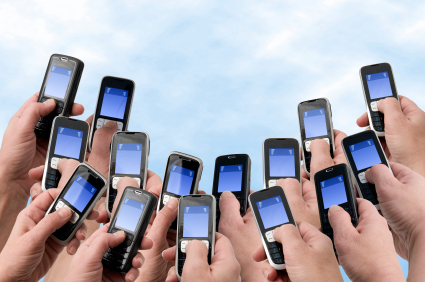