Caves are amazing underground places. They are not just dark, damp places full of bats. Caves have features that are found nowhere else on Earth. Two such features are called stalactites and stalagmites. These are the icicle-like formations that hang from a cave ceiling and cone shaped formations that pile up on the cave floor. How did these fascinating cave features form? Just how does a stalactite and stalagmite form?

In this interesting earth science project, you will see first-hand how cave formations, called stalactites and stalagmites, form slowly over time through the dripping and hardening of minerals. You will get to speed up the natural process and create a model of a stalactite and stalagmite using Epsom salts, a common household mineral.

Caves are unique geological formations. Stalactites and stalagmites form very slowly over thousands of years through a rather simple process that all begins with dripping water. In fact, a stalactite or stalagmite grows only less than one inch each every 100 years.

Many caves are made of limestone, a rock that is easily dissolved. Since caves are usually found underground, rainwater constantly drips down through the roof of the cave. Minerals from the limestone are dissolved into the water. The mineral that is dissolved by the dripping water is called calcium carbonate, also known as calcite. As the water trickles down from the ceiling of a cave, it drips ever so slowly. Once the water hits the air inside the cave, the water evaporates and the calcite in the water hardens. This result is deposits of rock in the shape of a stalactite or stalagmite -stalactites, being the icicle-like formations that hang from a cave ceiling and stalagmites being the cone shapes that pile up on the cave floor. This process is called deposition, which comes from the word "deposit" meaning "to build up". If the deposition remains undamaged for long enough, the stalactite and stalagmite will touch and a column will form. The limestone rock of the cave, with the help of rainwater, has dissolved and hardened into a fascinating new shape! 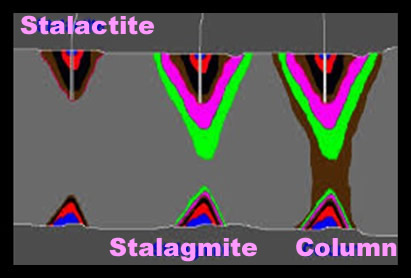 Print
Complexity level:
2
Project cost ($):
Time required:
The dripping down (stalactite) and building up (stalagmite) will take about 3-5 days. If you want a column to form (the stalactite and stalagmite to touch), this will take over a week.
Material availability:
Safety concerns: 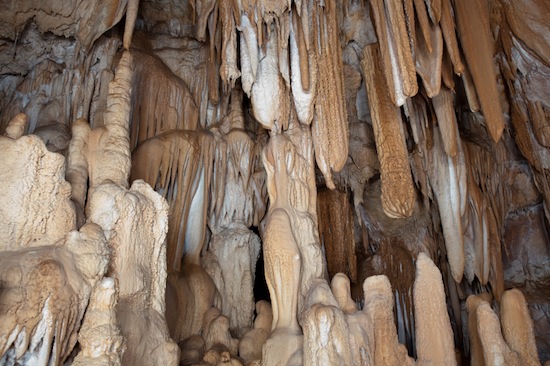