This science fair project was performed to compare the amounts of carbon monoxide gas released by cars of different ages. The tests were done by comparing the emission levels of a new car, a 5-year-old car, a 10-year-old car and a 20-year-old car.

The new car will emit the smallest amount of carbon monoxide, while the 20-year-old car will have the highest emissions.

The combustion engine of a car is one of the biggest contributors of air pollution, due to the steadily increasing worldwide car population.  The combustion of fuel and air in the car engine releases hydrocarbons, carbon dioxide, carbon monoxide and nitrogen oxide into the atmosphere.

Carbon monoxide consists of a single carbon and oxygen molecule (CO). It does not have any color or odor, but is a poisonous gas and a product of fuel that is not completely burned. During engine startups, the mix ratio between air and fuel is very low. This results in a lack of oxygen for the combustion to take place and higher carbon monoxide emissions. Carbon monoxide emissions are also higher in cars that are poorly tuned, and are used at higher altitudes.

In human beings, carbon monoxide affects the ability of blood cells to carry oxygen. This is because carbon monoxide is attracted to the hemoglobin in our blood and prevents it from supplying oxygen to the cells. When the carbon monoxide levels in the bloodstream becomes too high, symptoms of nausea, dizziness, flu and headaches start to appear. Higher levels of carbon monoxide can cause brain damage and death.

Carbon monoxide gas is extremely poisonous. Use a gas safety mask and ensure the presence of adult supervision when performing measurements. 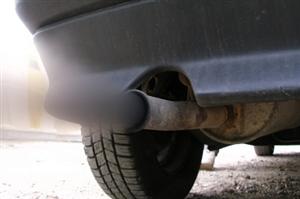