This science fair project was done to investigate the effect of increasing DC voltage and the concentration of electrolyte salt on the rate of production of hydrogen gas during the process of electrolysis.

When the ions reach the surface of the electrodes, the following reactions may happen:
a.    Deposits may form on the electrode surfaces.
b.    Gases may be released from the electrodes.
c.    The deposits and gases formed, may subsequently be dissolved in the electrolyte.

Use only batteries. Do not connect the wires to a mains supply. 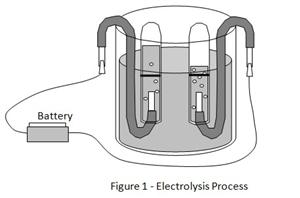