Placing a porous material like a sponge, charcoal or broken ceramic in the salt solution helps to draw in the mixture through capillary action. The water will evaporate from the surface of the porous material, leaving behind crystals. The crystallization process is driven by the evaporation of water and placing the solution in a dry place or under a slight breeze will help the crystals to grow faster.

A laundry agent known as bluing liquid is sometimes used to help the crystals to form. It contains a fine powder that acts as a nucleation site for crystals to grow. Bluing liquid also contains an iron compound that will react with ammonia to form iron salts. 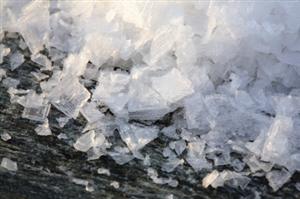