This science fair project was performed to find out if relatively bouncier golf balls are able to travel further than less bouncy ones. The tests were done using 3 brands of golf balls.

Bouncier golf balls will be able to travel further  than the less bouncy  ones.

Why do balls bounce?

Balls are able to bounce as a result of the compression of air inside the ball. When a ball is raised above the ground, a ball gains potential energy. Releasing the ball from the raised position will result in the ball falling to the ground because of the gravitational pull of the Earth on the ball. The ball will accelerate and gain velocity.

Never stand anywhere in front of a golfer who's about to take  a swing. Beware of swinging clubs - which can cause severe injury 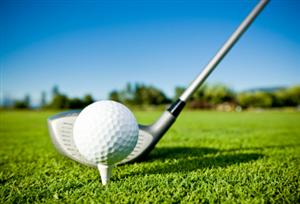