This science fair project was conducted to compare the effectiveness of different forms of enzymes in removing grease from a grease trap. Tests were done using liquid, powder and solid enzymes to breakdown fat, oil and grease that were collected from a grease trap.

Liquid enzymes will be the quickest to break down the fat, oil and grease.

With a rising number of restaurants, fast food chains, diners and other food outlets in cities, increasing amounts of fat, oil and grease are being discharged into the city sewer systems. These discharges solidify when cooled. They then combine with other solid materials that are discharged into the sewer pipes and cause blockages.

Grease traps are part of a plumbing system and are used to intercept most fat, oil and grease before they go through wastewater treatment. Wastewater usually contains small amounts of oil which floats in a septic tank. This layer of scum is slowly digested by microorganisms via anaerobic digestion. However, large amounts of discharge can overwhelm this system and result in untreated waste being released into the environment.

Print
Complexity level:
6
Project cost ($):
40
Time required:
1 day to prepare, 10 days for observation
Material availability:
Enzymes may be purchased at a DIY store or some of the larger supermarkets.
Safety concerns: 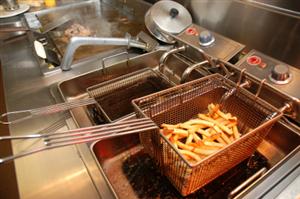