The science fair project was carried out to determine which shape works most effectively for a skyscraper in withstand winds of high velocity. This information would be very useful for building engineers. The experiment was performed on model buildings with rectangular, triangular, circular and oval cross-sections

A skyscraper with a circular cross-section will be able to withstand the greatest force of wind.

As buildings are built taller than ever, these skyscrapers have to deal with increasing vertical gravitational forces as well as horizontal forces resulting from wind. Just like swaying palm trees, these skyscrapers actually are able to sway several feet in any direction without causing any damage to the integrity of their structure.

However, it is important to consider how this movement affects the occupants inside these buildings. The movement will be felt more evidently on higher floors. Special design features such as the use of internal counterweights to help shift the weight of the building towards it’s center, are built into the structure of the building. These measures help counter the horizontal forces caused by wind.

The height limit of skyscrapers is not determined primarily by the structural material used to construct the building. The main factors that limit a skyscraper’s height are wind forces, limitations to the elevator systems and of course, budget. On a calm day, at an altitude of two kilometers, skyscrapers have to deal with 35km/hour wind speeds. At an altitude of 10 km, wind speeds can increase significantly to as much as 288km/hour. However, the air will also become thinner at higher altitudes, reducing  the force of wind on the building.
The shape of a skyscraper, especially on higher floors may affect how the building deflects wind. The Burj Khalifa skyscraper in Dubai for example, is built on several separate stalks, which top out unevenly around the central spire to help the building withstand against the stress of wind.

Basic safety requirements. Ensure that you handle the fan with care  to avoid accidents. 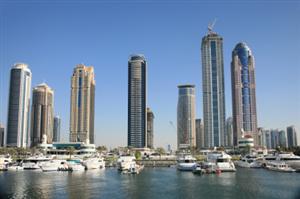