This science fair project was conducted to ascertain the similarity and differences between twins. The experiment involved the participation of male twin pairs, female twin pairs, male-female fraternal twins and siblings.

Identical twins are children born from the same pregnancy. They are formed when a fertilized egg splits into two and forms 2 embryos. Both twins will have identical DNA and they will look very much alike. Most twins will also behave very similarly. Fraternal (non-identical) twins are formed when two separate eggs are fertilized at the same time, within the mother’s womb. These twins do not have identical DNA, and may be of opposite sexes.

Who we are and what we become is determined by both nature and nurture. Nature decides the genetic DNA that we inherit from our parents. It determines things like our skin color, hair type, gender, eye color and many more.Nurture also plays a very important role in our development. The environment we grow up in, the people we meet, the experiences we have are among the many factors that help to nurture us. For example, not all identical twins will have the same weight and height as they age. Their actual physical appearances will be determined by the food they eat and the exercise they get, amongst other things.

Interestingly, one difference among identical twins is their fingerprints. The fingerprints of twins may look very similar but they really are not identical. 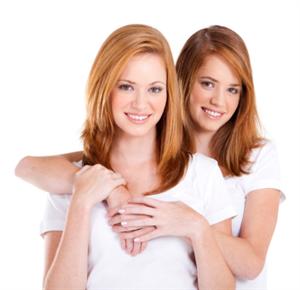