This science fair project was conducted to find out how the temperature of a fluid affects its viscosity. The testing was done by measuring the viscosity of water, milk and corn oil using a measurement cup at different temperatures.

Water has the lowest viscosity and the fastest rate of flow followed by milk, while corn oil has the highest viscosity.

Viscosity is the measurement of resistance by a fluid to deformations caused by tensile stress and shear stress. It is commonly referred to as the thickness of a fluid. A thick fluid will have higher viscosity and a thin fluid will have lower viscosity. Viscosity also refers to internal resistance experienced by the fluid before it can flow.

The presence of viscosity in a fluid is caused by internal friction in a substance. Both fluids and gasses are made up of adjacent layers. When external pressure is applied to a fluid, the friction that occurs between layers will determine the type of response and flow that will happen. The measurement of fluidity is the opposite of viscosity where the lack of fluid resistance is measured. 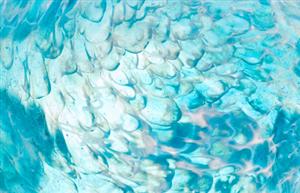