This science fair project was performed to better understand the relationship between road traffic flow and emission pollution at different times of the day. The science project involved monitoring traffic conditions beside a highway - including average traffic speed, the number of vehicles and flow patterns.

Emission pollution will be at its highest in the early mornings and late evenings, due to heavier road traffic.

Motor vehicles run on gasoline. Several types of pollutant gases are released into the environment as a by-product of the combustion process that takes place within combustion engines. These pollutants cause poor visibility (smog), respiratory problems such as asthma and even affect threaten the cleanliness of our water supply sources, such as our reservoirs and lakes.

Among the pollutants that are released by motor vehicles, are hydrocarbons, carbon monoxide, nitrogen oxides, sulfur oxides and other particulates. Hydrocarbons are essentially partially burned fuel they are extremely toxic. They cause liver damage and cancer. Carbon monoxide reduces the ability of blood to carry oxygen and overexposure to it can be fatal. Nitrogen oxides affect our resistance to respiratory infections. Particulates from vehicle fumes can also cause respiratory problems.

Good driving habits and a well maintained car help to reduce the pollution emitted by vehicles. Most vehicles run most efficiently at speeds between 55km/hour to 75km/hour. At this speed, the least amount of fuel is consumed and the least amount of pollution is emitted for the distance traveled. Avoid driving during peak hours, as driving in heavy traffic results in frequent accelerating and braking - and this leads to higher fuel consumption and increased pollution.

Adult assistance required. Be careful when you’re on the road. Choose an observation point that is safe and observe all road safety rules. 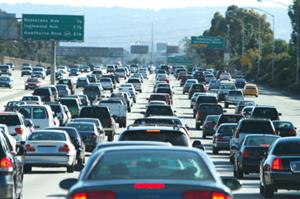